About the Pressure Specified Sensory Device ™

The Pressure Specified Sensory Device (PSSD) is the most accurate way of testing the lower extremity for sensory deficits because it can quantify and record both specific peripheral nerve threshold levels and peripheral nerve innervation density (which reflects axonal degeneration). As a result, the PSSD is able to identify pathologic changes in nerves at subclinical levels and it is pain free. 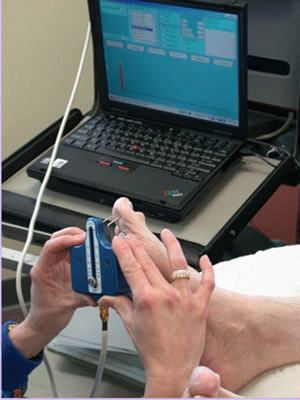 In 1989, A. Lee Dellon, MD, a Plastic Surgeon, Hand Surgeon, and Peripheral Nerve Surgeon, worked with an Aerospace Engineer to develop a computer-based device to measure the amount of pressure required for a person to determine if one or two rounded objects were in contact with that skin’s surface. No needles or electric shocks are used. Neurosensory testing is painless. The device is now called the Pressure Specified Sensory Device™ (PSSD). The PSSD can be used to test any area on the skin that relates to a nerve.

Why should I have PSSD testing? The PSSD can identify damaged nerves that may be causing:

Following surgery to decompress a nerve, the PSSD can identify nerves that are:

Is the PSSD cleared by the FDA? Yes! The PSSD is cleared for use by the Food and Drug Administration of the United States Government, and furthermore, it is approved by the National Institute for Standards and Testing.

How am I tested with the PSSD? You are seated comfortably in a reclining chair. The small blue PSSD is hand held by the person doing the testing, and the two small, rounded, metal probes are touched gently to the skin area being tested.

What does a PSSD report say? Computer reports of Neurosensory testing with the PSSD for Diabetic Neuropathy are shown below. The reports show the left side of the measured area in blue and the right side of the same area in red.

In the report to the LEFT, both blue and red bars are elevated for a nerve on the top of the foot (the peroneal nerve) and bottom of the foot (tibial nerve). This is the pattern for a neuropathy. Two points can still be discriminated from one point touching the skin, but the distance between the points is wider than normal. This is the pattern for nerve degeneration. This person is at risk for ulceration. Recovery after nerve decompression surgery may occur within three months. 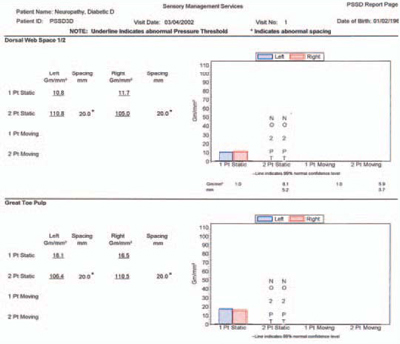 In the second report on the LEFT, two points can no longer be distinguished. Only one point touch can be felt. This degree of neuropathy is severe. Recovery after nerve decompression may take one year.

Does PSSD testing have risks? Published outcomes of Neurosensory testing with the Pressure-Specified Sensory Device™ document that the PSSD offers the best hope to identify the source of your symptoms, to document the stage or degree of nerve compression or neuropathy, and to determine if your nerves are regenerating. There are risks, including identifying a problem which is not actually present, or failing to identify a problem that is present. Every Neurosensory test relies upon the cooperation of the patient during the testing procedure, the ability of the person doing the testing, and the interpretation of the PSSD results by the doctor in terms of the entire context of your clinical history and physical examination.

Who should do Neurosensory testing with the PSSD? Only people certified by completing a formal training program in Neurosensory testing with the Pressure Specified Sensory Device™ should do this testing. The Foot & Ankle Center, P.C. has received this certification from the Institute for Peripheral Nerve Surgery. Dr. Talarico has been using the PSSD and performing the nerve decompression procedures for over eight years.

What is the surgery like? The surgery takes about one and one-half hours under general anesthesia and is performed as an outpatient. For the tarsal tunnel, an incision is made on the inside of the ankle. The tibial nerve is identified by releasing the thin ligament which forms the roof of the tarsal tunnel. The branching pattern of the tibial nerve is then identified. Each of the three main branches of the tibial nerve has its own fibrous tunnel that must then be released. Scarring within the nerves in each tunnel can then be removed with microsurgery (internal neurolysis). Local anesthesia is placed into the skin, so the toes and bottom of the foot may be numb for a few hours, but there will be little pain after the surgery. You can walk using a walker or crutches immediately after surgery. The bandage is removed after one week. You will continue using a walker or crutches for three weeks, which is when the sutures are removed. Two other nerves are often decompressed when necessary, the common peroneal nerve on the outside of the leg below the knee and the deep peroneal nerve on the top of the foot. 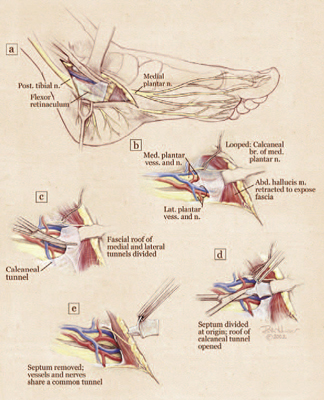 Surgery on the Tarsal Tunnels: The steps in decompression of the four medial ankle tunnels for treatment of tarsal tunnels syndrome:

What are the risks of surgery? The published outcomes of the Dellon-approach to the treatment of tarsal tunnels syndrome offer the best chance for success for relief of your symptoms. There are risks associated with every surgical procedure, such as the risk of anesthesia, bleeding and infection. Complications unique to decompression of the four medial ankle tunnels are: